How do you build an iconic retail venue in the bustling location at Michigan Avenue and the Chicago River?  What's the best way to integrate modern, innovative technology with historic landmarks such as Tribune Tower and the Michigan Avenue bridge?

Removing Boundaries to Connect Both Physically and Creatively

The first thing visitors experience at the new Apple Michigan Avenue is the natural placement of the store in relation to the Chicago River.  Every detail of this new structure was designed to integrate building, river and city.

“Apple Michigan Avenue is about removing boundaries between inside and outside, and reviving important urban connections within the city,”

The enclosure features 14-foot-high glass on Pioneer Court Plaza and 32-foot-high glass forming an unobstructed view along the river.  Grand staircases on either side lead down to a 20,000 square foot retail concourse at the water's edge.

Working in a Historic Neighborhood

It wasn’t the new building’s proximity to the Chicago River that was the biggest construction challenge.  It was the location adjacent to historic landmarks built nearly a century ago.  During the year-long preconstruction phase, the Power team reviewed old CDOT documents and the original drawings from the Equitable Building at 401 N Michigan Avenue to determine what would be uncovered below the surface of Pioneer Court Plaza and the Riverwalk.

Physical investigations and 3D laser scans below the plaza, bridge, and parking garage for the Equitable Building created an accurate picture of underground conditions.  In addition to old construction debris, Power found hidden piles of bricks from the construction of the Michigan Avenue Bridge and an eight-foot diameter sewer line and river water supply/return lines used to heat and cool the Tribune Tower.

Working with structural engineer, Thornton Tomasetti, these scans were integrated into the 3D engineering model to develop the structural system that would support upper Michigan Avenue with minimal impact on the existing below grade conditions.  By thinking creatively, Power and Thornton Tomasetti were able to incorporate the 1913 and 1963 foundation systems rather than removing or working around them. 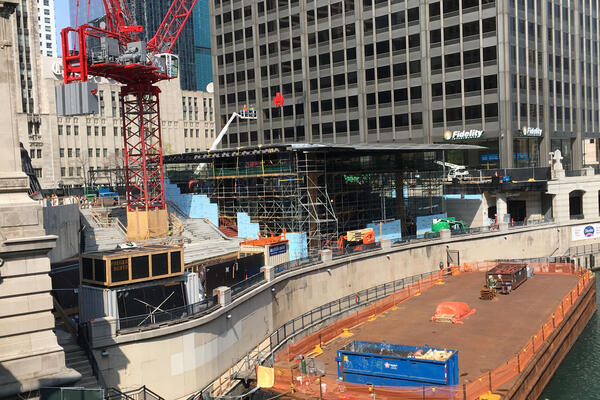 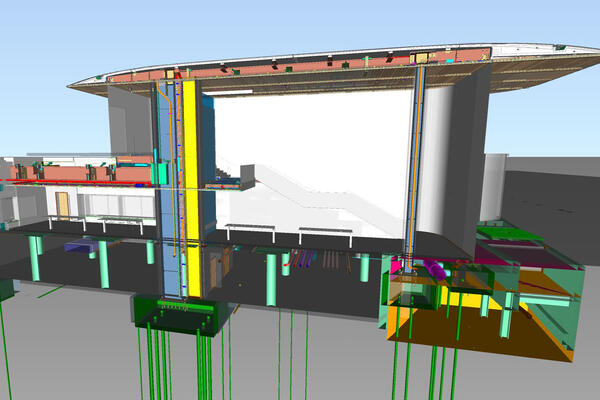 Staying Organized in the Midst of Bustling Urban Activity

The roof panels arrived in a 10’x 10’ x 50’ steel-framed crates. The tower crane lifted the roof crates off the truck on Michigan Avenue and placed them on the barge, which was large enough to hold two crates and four roof panels at a time.   Panels were uncrated and prepped on the barge before being lifted into place.  The 111-by-98 foot roof consists of 22 ultra-thin carbon fiber panels installed over a 10-day period.

Constructing the open design of Apple Michigan Avenue required a new level of artisanship to achieve the intricate details and tight tolerances across building elements.    The wood ceiling panels were arranged to form a cohesive design from East to West.  The horizontal lines within the retail area were also aligned across wall components.

To assure these exacting standards could be met, the Power team 3D-printed light fixtures and incorporated them into a full mock-up of the wood ceiling panels. This assured the team that everything would fit properly and set the quality standard for installation.

Concealing infrastructure within a See-Through Building

Constructing a building with only four structural columns and a seamless glass enclosure provided its own complexities.   Mechanical, electrical, and plumbing utilities that typically flow through walls and down the exterior support structure had to be accommodated some other way.

Because the design would render the roof drains inaccessible after installation, piping was integrated within the columns during fabrication.  The plumbing contractor visited the steel fabricator to collaborate and weld the drains to custom plate columns.  Once installed onsite, the seams welded, and the columns lowered into place, the drain pipes were functional but completely hidden.

The extensive technological requirements of this Apple facility are fed by miles of electrical conduit.   HVAC ducts are routed within the ceiling and below the floor to heat and cool the interior as well as the exterior glass enclosure, eliminating condensation.   Power and the design team 3D modeled every conduit on the project – every nut, bolt, and fastener – to ensure that all infrastructure components would fit into the tight column spaces.   The BIM model was then used for layout and installation resulting in zero field changes. 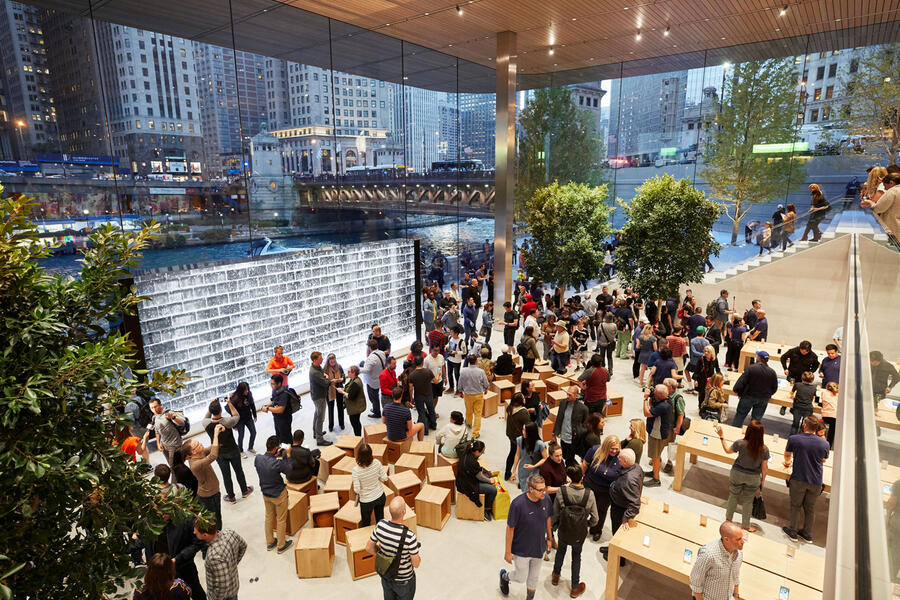 Power is proud to be a part of the team that brought a new iconic building to Chicago's riverfront.

Apple Michigan Avenue, with its extensive views and integrated plaza and Riverwalk, is setting a new standard as both gathering place and retail experience. This iconic structure brings together creative solutions to interesting project challenges, innovative construction techniques incorporating the latest technology, and a design that embraces the area around it and invites people to become a part of it.